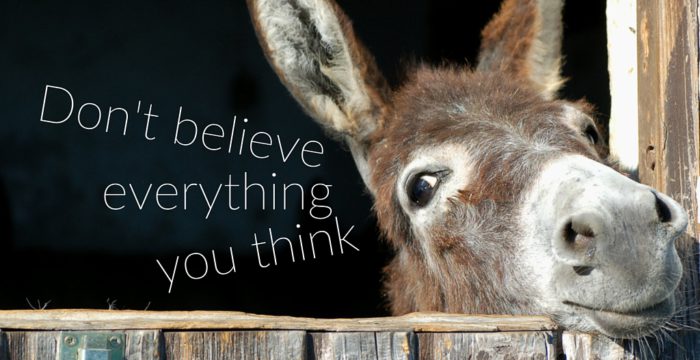 How can you find relief and freedom from emotions that devastate you?

Cravings, sadness, fear and anger are nothing other than mere thoughts that we dramatize.

When we describe a passing thought as “a craving” because of the sense of urgency it gives us, we think we need to do something immediately to compensate that uncomfortable feeling. So we act on the thought, the craving is relieved, and a neuronal pathway is formed.

So the next time that thought reaches our consciousness, and the uncomfortable feeling arises from it, we habitually act.

We reach for a TV remote, or we go on a senseless shopping trail on Amazon, or we eat a chocolate. Or two.

In the brain there is now a vicious circle.

But what feels like an unbearable compulsion began as only a thought. If you believe and then dramatize the thought, the path to freedom and serenity is blocked.

And that path is everything.

“Compulsions obstruct the path by monopolizing consciousness,” says Buddhist scholar Stephen Batchelor in “Living with the Devil”. “The hypnotic fascination they exert prevents us from attending to anything else. We behave like a rabbit dazzled by the headlights of a car.”

We long to die to this discomfort. To not feel it.

Craving, sadness, anger or fear is suffering that always began with thoughts we believe in. Each emotion always begins as a simple thought we didn’t question yet.

Stressful thoughts like “I am not good enough!”, “she is disrespectful to me!”, “I hate my body!” and other all-consuming quests for love and approval cause us a lot of suffering.

In her book “I Need Your Love? – Is That True?” the bestselling author Byron Katie introduced thousands of people to her simple and profound method of finding happiness through questioning the mind. Using the method, you will inquire into painful beliefs that you’ve based your whole life on—and you’ll be delighted to see them evaporate.

Katie shows you how unraveling the knots in the search for love, approval, and appreciation brings real love and puts you in charge of your own happiness.

How long do you want to believe in your stressful thoughts which cause you suffering every day?
Do you really want to wait a decade more until you finally decide to stop?

For many years I have been on my intensive journey of personal growth, all the while questioning my thoughts and freeing me from my mental blocks. And I must say that I am quite delighted as I see how powerful, how self-accepting, how self-loving and altogether kinder a person I am becoming each day.

Before I began this work and became a professional coach, I was thinking that my emotions and thoughts would kill me. Today however, all my relationships both at work and in my personal life are getting greater and greater, and I am immensely grateful for this.

Questioning one’s own thoughts isn’t easy. But this work on your thoughts, your inner beliefs and blocks worth it to begin with it right now.

What else can you do to grow and to stop to be the slave of your thoughts?

Stephen Batchelor says “To escape their grip does not entail suppressing them but creating a space in which we are freed to let them go and they are freed to disappear.”

His recommended form of creating that space is meditation.

But what if it were easier than that? What if we already knew about that space. . .that it was pre-existing inside of us? What if we were (already) that space? The space that the thought had shown up in?
And if we just relaxed a bit and grew still, the thought would just continue on passing by and disappear far away…

“As soon as I know the mind is distorted,” says Shantideva, “I should remain as steady as a log.”

← PreviousWofür brennst Du? – Vortrag IAA Frankfurt
Next →Who are you not to be brillant?

I am a Sparring Partner for High Performers. I help people to become stronger and happier. Leaders who work with me achieve a new level of mental strength, better self-regulation, and new, unimagined ways to succeed. Born in Siberia, I went to school and studied in Russia, France and Germany. In my work I combine scientific approach with healing work with horses and ancient Shamanic and Tibetan Wisdom. My working languages are English, German, French and Russian.